Nestled in the heart of downtown Greenville, Springwood Cemetery fronts on North Main Street and is bordered by Academy Street, Church Street and Elford Street. It is known for its beauty, landscape, and rich history. The cemetery is the resting place for many of Greenville’s most prominent citizens. However, the cemetery is not simply a memorial to great names, for it is the resting place of more than 10,000 mortal beings from all walks of life, with approximately 2,600 graves with no headstones. The great variety of monuments in the cemetery commemorate the famous as well as the "now forgotten," making it a compelling lesson in Greenville’s history.

Springwood Cemetery, only one acre in size at the time, was first opened to the public for burial in 1829. The original South Carolina grant on which Springwood Cemetery stands was a grant in 1784 to James Hamilton. Less than one month later, John Timmons received a grant of 473 acres, which included the land on which the present‑day cemetery is located. The overflow of a spring once passed through the cemetery, for which it is believed the cemetery was named in what later became a small family burial ground for her daughter and son‑in‑law, Elizabeth Blackburn Thompson and Waddy Thompson. From these beginnings grew the larger Springwood Cemetery as we know it today.

In subsequent years, additional acreage was added, including a public section for African Americans, dating back to before 1863.

The Springwood Cemetery Advisory Committee members are committed to preserving the history and beauty and raising awareness of the historical significance of the cemetery, while raising funds for additional capital improvements needed to develop and beautify the cemetery.

If you would like to make a donation to Springwood Cemetery and receive notices of Annual Meetings and special events, please complete a membership form and return it by mail along with your donation.

Presales for the new Springwood Cemetery Columbarium are underway and include niches, memorial wall plaques and a limited number of memorial benches and trees. The columbarium will be located between Section L and the back garden of the Kilgore-Lewis House and will be built in two phases. Phase I will include four walls consisting of 240 double niches and 96 memorial plaques and Phase II will include five walls consisting of 300 double niches and 120 memorial plaques. Construction on Phase I will begin with advance sales of approximately 130 double niches. 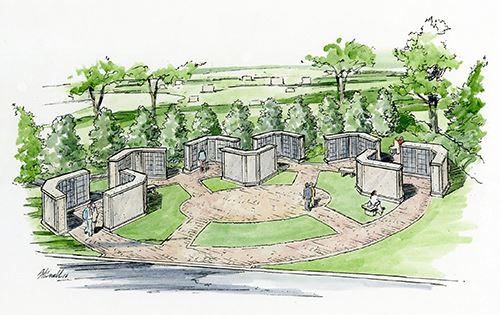 The cost of a double niche is $5,000 - $6,000 (depending on location) and the price includes perpetual care and engraving. Niche opening and closing fees are not included in the purchase price. Memorial costs are $5,000 for a granite bench, $2,500 for a magnolia tree and $500 for a wall plaque. The price includes engraving.

Springwood Cemetery fronts on North Main Street and is bordered by Academy Street, Church Street and Elford Street. It is one of the oldest municipal graveyards in South Carolina and was listed on the National Register of Historic Places in 2005. With the high demand for burial space at this historic site and people increasingly choosing cremation, advocates for Springwood Cemetery have envisioned building a columbarium on its grounds for many years.

Appointments are required for advance sales and full payment is expected at the time of purchase. For more information or to schedule an appointment, call 864-467-4467 or email springwoodcemetery@greenvillesc.gov.