The Swamp Rabbit Trail is a 22-mile multi-use (walking and bicycling) greenway that traverses along the Reedy River, an old railroad corridor and City parks to connect Travelers Rest with the City of Greenville, South Carolina.

The Swamp Rabbit Interactive Map was inventoried, photographed and developed by the City of Greenville GIS Division, with support from the City's Parks and Recreation Department and the Greenville County Recreation District. Its purpose is to aid everyone - from out-of-town visitors interested in experiencing the Swamp Rabbit Trail to regular trail users - by providing useful trip-planning information. The map is especially content-rich inside the City of Greenville — featuring trail amenities and points of interest, as well as special considerations for a safe experience. Photos, IPIX 360 degree images, and audio are available at select locations. This web map is accessible from all types of devices and operating systems.

We recommend using a standard internet Web Browser such as Google Chrome, Microsoft Edge, Firefox, or Safari for pre-trip planning. Go directly to the map and bookmark it for future reference. 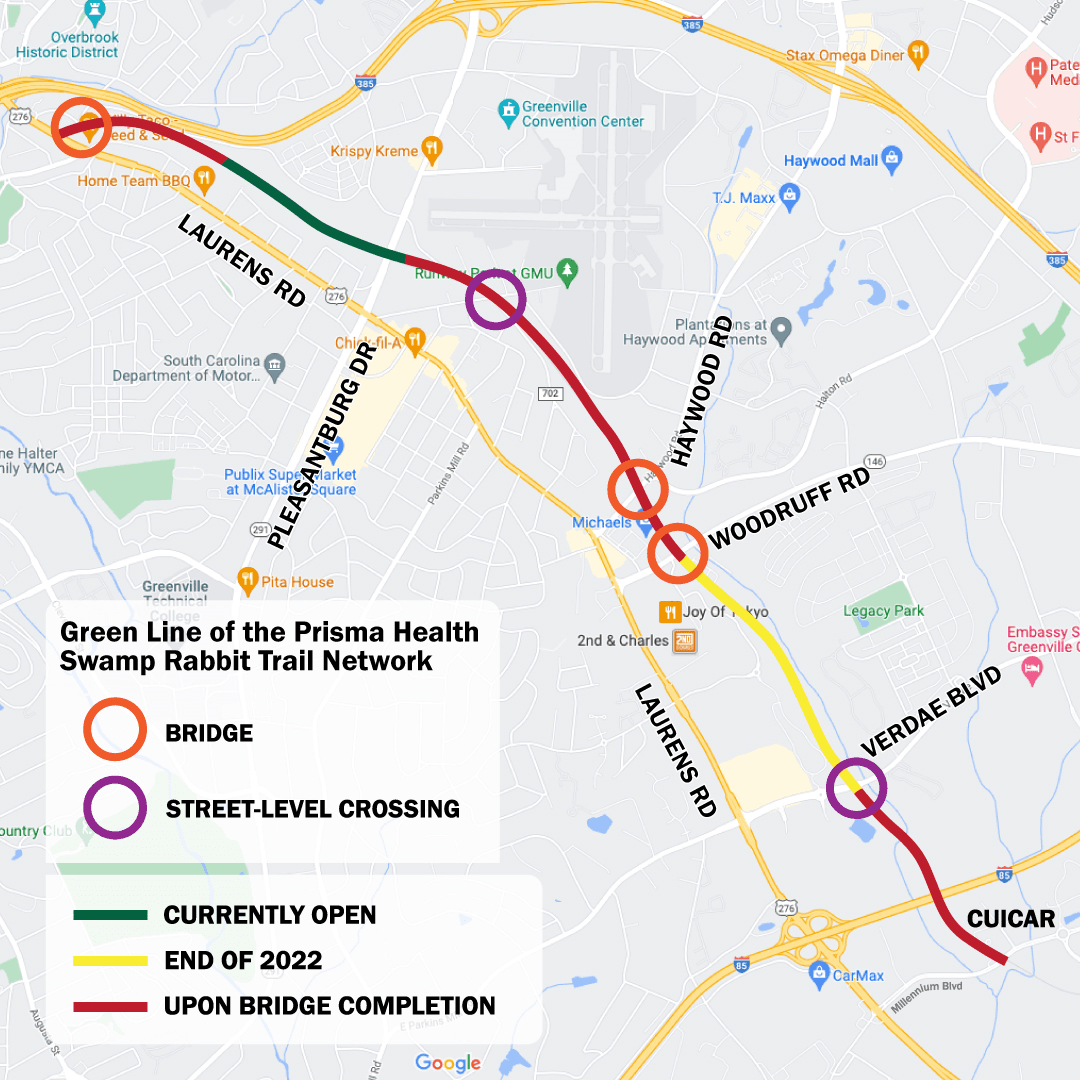 Walkers, runners and bikers will soon be able to safely and conveniently travel from downtown Greenville to CU-ICAR via the Green Line of the Prisma Health Swamp Rabbit Trail (SRT). The SRT extension will run from Cleveland Park to CU-ICAR, along the north side of Laurens Road.

The new trail is a cooperative city-county project, with the city responsible for building The Cleveland Connector (also known as the Paperclip), Laurens Road Bridge, Haywood Road Bridge, and Verdae Blvd Crossing. The county will pave the trail and continue owning and maintaining this Green Line section.

City Council also gave initial approval to an ordinance creating a formal agreement between the city, Verdae Development Inc. (VDI), and Hollingsworth Funds Inc. (HFI) for the construction of a trail connector and bridge between Legacy Park and the Green Line extension. VDI and HFI would fund the design and construction of the trail with input from the city. Upon completion, the infrastructure would be dedicated to the City for maintenance and public use.

The 20+ mile trail is a regional recreational amenity, economic driver and multimodal transportation asset for the city and county.